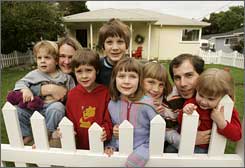 With college education for six kids and their own retirement to pay for, Amy and Kevin Smith of Pleasant Hill, Calif., need help stretching their dollars beyond routine bill-paying.

Kevin Smith, 35, earns $60,000 as an information technology systems administrator in San Francisco; Amy Smith, also 35, is a stay-at-home mom. The couple are raising six kids — Caleb, 10, Anna, 8, and two sets of twins, 6-year-olds Jacob and Madeline, and 21/2-year-olds Josiah and Grace — on a tight budget. “Every penny is accounted for,” says Amy Smith, a self-professed “Quicken fiend.” The last splurge was buying a $13 bed for 3-year-old Lhasa Apso, Ozzie, in April. “I can’t tell you what a big deal that was for my kids.”

The couple rent a 1,000-square-foot, three-bedroom, one-bath house with a big yard for $1,380 a month. They pay $100 a month to her parents for debt owed on a Toyota van, and $90 goes to monthly cellphone bills. They don’t have cable TV or a newspaper subscription.

“My grocery bill alone is enough to give you pause,” Amy Smith says.

Kevin Smith says one goal “is having a bigger house for us to live in — the sooner, the better.” It doesn’t matter, he says, whether that means renting or buying. The bathroom situation in the bustling Smith household — eight people, one bathroom — can be trying.

The Smiths plan to cover part of their kids’ college expenses but want their kids to contribute as well. They also want to start saving for retirement.

Each month, $591 goes toward $18,000 in debt under a payment plan through a credit-counseling agency. Most of the debt came from using credit cards in 2003 and 2004 for health costs — including operations for three kids — that weren’t totally covered by insurance. “It’s like a lot of things in life,” says Amy Smith. “So many things happen outside of our control.”

The Smiths don’t have wills spelling out how they want their assets split up if one of them dies. And they don’t have living wills, stating what type of medical care they would want if they are injured or sick and can’t speak for themselves.

They do have an $800,000 life insurance policy, and they’ve saved $2,500, through strict budgeting, but aren’t sure whether a bank account is the best place for the money. His employer offers a 401(k) plan, but the couple doesn’t save in it because they worry about exposing their money to stock market volatility.

“At this point, we’ve got spending under control,” Kevin Smith says. “It’s just a matter of what to do with the little savings we’ve built up.”